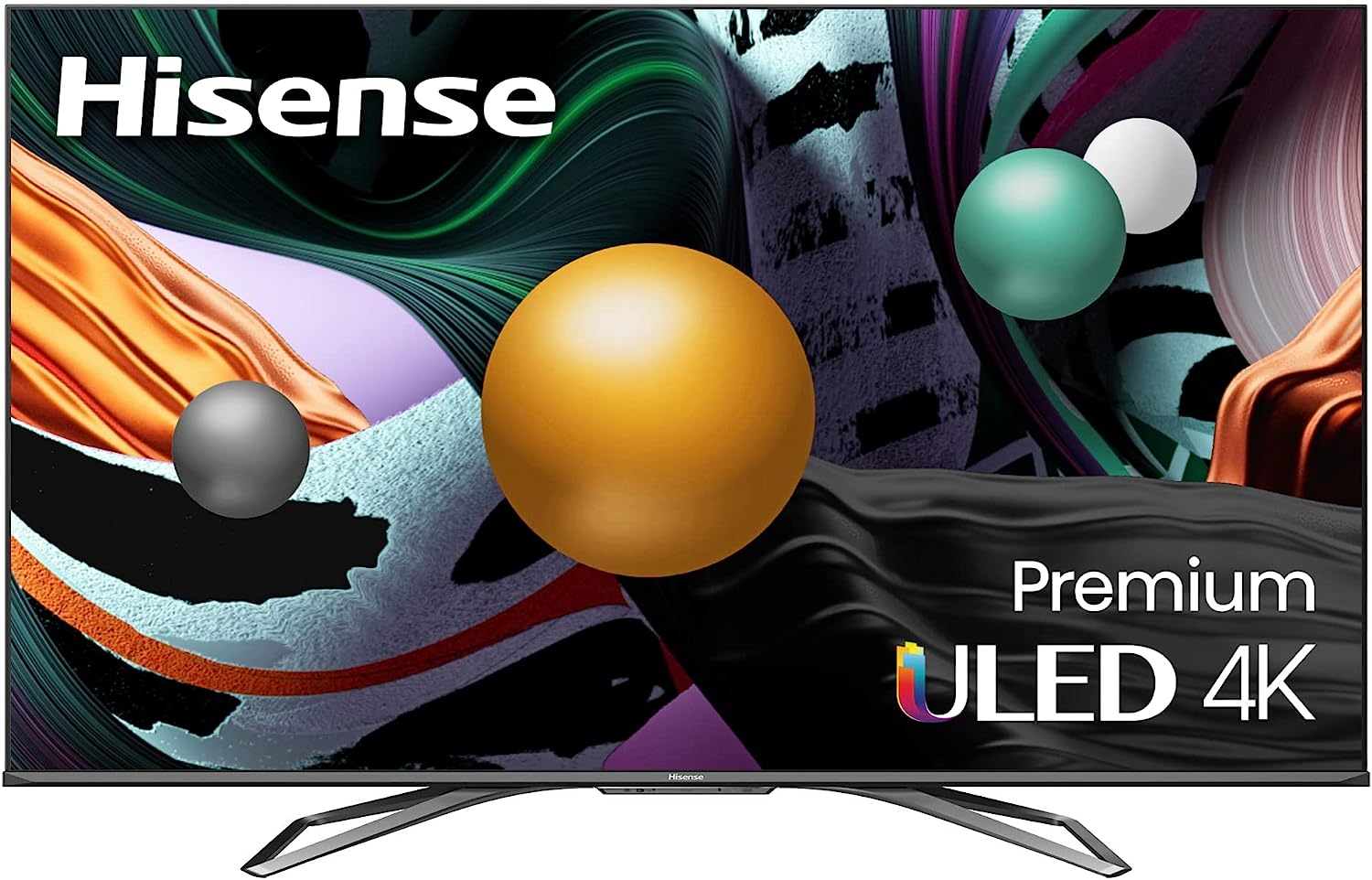 Hisense continues to improve its game in the value-priced TV market year after year. For $1,250, the 2021 65-inch U8G is the company’s best flagship yet, with exceptional image quality and reliable smart TV streaming.

There are more attractive QLED and OLED TVs on the market, but you’ll have to spend at least $500 more to get a significant increase. The U8G should be at the top of any buyer’s list if they desire a 65-inch TV for less than $1,500.

The U8G has a nice, modern appearance, but it’s not as sleek as some of the other sets I’ve seen. With a profile of around four inches, the panel is thicker than most rival displays, and the unusually curved stand could be a pro or con depending on your personal taste.

That said, I’m not a fan of external aesthetics in TVs, and I’m willing to sacrifice some style points in exchange for excellent image quality at a reasonable price. Even if its look doesn’t amaze your guests like a super-thin Neo QLED or OLED, the U8G delivers where it counts.

The U8G has four HDMI ports, two of which are HDMI 2.1 compatible for next-generation gaming. Although this is better than the lone 2.1 connector on Samsung’s new flagship, some firms, such as LG, offer four on their high-end sets.

For easy navigation, a simple click-button remote is included. It has all of the necessary features, as well as shortcut buttons to popular streaming apps like Netflix and Disney Plus. Voice control enabled by Google Assistant is also available on the remote, and it works wonderfully.

The first setup process for the television walks you through general housekeeping and policy agreements. By synchronizing with your Wi-Fi data and current Google account, you may even use an Android phone to speed up the process.

I recommend utilizing the “Theater Night” mode for SDR material, “Theater HDR” mode for HDR10 content, and “Dolby Vision Dark” mode for Dolby Vision video with local dimming set to high for the best out-of-box image. To get the most realistic image, you’ll also want to disable all extra picture processing options in the settings menu.

However, there was one glitch with Dolby Vision content that I noticed. For some reason, black levels appear to be a step too high, causing the backlight to appear lifted, giving dark images a washed-out and uneven appearance. This was rectified by lowering the brightness from 50 to 49, allowing the set to generate inky black levels.

Performance in the film

Whether you’re viewing movies in a dark home theater or surfing through channels in a living area with a lot of natural light, the U8G delivers amazing picture clarity. Quantum dots and full-array local dimming help the TV achieve the best brightness performance I’ve seen on a display this price range.

I measured a high of roughly 1,800 nits on a 10% window using an X-Rite i1Display Pro Plus Colorimeter and test patterns from the Spears and Munsil UHD Benchmark disc. This is comparable to Samsung’s flagship QN90a, which is about $900 more expensive. I first measured even higher numbers, but after cycling through patterns for a few minutes, the set dimmed a little. With that in mind, you might be able to get short bursts of exceeding 2,000 nits. This brings HDR content to life and aids viewing throughout the day when there is a lot of ambient light in the room.

Thanks to its 360 dimming zones, the TV can achieve solid black levels in addition to high brightness. When seen in a dark room, the image appears beautiful and inky. However, in wide-screen movies, light tends to leak into black bars, and the backlight on my review unit is a touch uneven at times, with the corners appearing a little brighter than the rest of the screen.

Mild blooming is also seen around characters and bright objects against dark backgrounds. For example, I noticed halos surrounding characters in “A Quiet Place Part II” when they were lighted in dark moments. This is true of all local dimming TVs, although the U8G falls short of the precision of a more expensive set like the Samsung QN90A. While the peak brightness of the U8G and the QN90A are identical, the QN90A has greater contrast and black levels overall.

Despite some minor local dimming concerns, the set’s overall image quality is excellent for the price. Colors are vibrant, detail is sharp, and 4K movies and television shows are just stunning. That is, as long as you keep your gaze concentrated on the screen.

When viewed from the side, the U8color G’s and contrast distort like most LCD TVs with a vertical alignment (VA) panel. When I turn to the side of my couch to watch a sequence in “Ex Machina” where two characters stand in a chamber drenched in strong red light, the deep red veers towards orange. From the side, the black levels diminish as well.

In this price range, TVs with poor viewing angles are widespread, and the U8performance G’s is comparable to TCL and Vizio models. More expensive OLED TVs and Samsung QLED models, on the other hand, all have better viewing angles.

Despite Google’s new Google TV smart TV platform, the U8G runs on the company’s older Android TV operating system (OS). Android TV, on the other hand, has received a redesign that makes it look more like Google TV.

The current Android TV UI doesn’t have all of the bells and whistles that the Google TV OS does, but it looks and works nicely. The navigation is straightforward, making it quick to sort and browse through apps and movies you’ve recently watched.

The platform integrates with current Google accounts and gives you access to almost any popular service you can think of. This includes Apple TV Plus, which was absent from the previous year’s lineup. Most apps that support these capabilities also support 4K HDR playback and Dolby Atmos.

At the end of the day, I still prefer to use a separate streaming device like as a Roku Ultra, but those who only want to utilize the TV’s built-in apps will have few complaints.

Anyone looking for a top 65-inch 4K TV for under $1,500 should consider the Hisense U8G. There are more costly TVs with better contrast, broader viewing angles, and more beautiful designs, but the U8G delivers outstanding performance all around for the money.

Other affordable flagship TVs from Vizio and TCL are among the primary competitors of the Hisense U8G. The TV also holds its own against more expensive models from Samsung and other manufacturers.

The Vizio P-Series is likewise a good deal and has comparable picture quality. However, it cannot reach the same brightness as the U8G and has fewer local dimming zones. I also like the Android TV UI on the Hisense device to Vizio’s SmartCast system.

On paper, the TCL 6-Series should have a little advantage over the U8G because of the usage of Mini LEDs, which provide superior contrast. There’s also a new TCL model that includes Google TV streaming. Despite the TCL’s usage of Mini LEDs, the U8G has more dimming zones and outperforms it in terms of peak HDR brightness.

I’ve had problems with Hisense televisions in the past, but the company has improved significantly in recent years. The new 65-inch U8G is one of the company’s best TVs yet, and its stunning HDR brightness beats out TCL and Vizio’s similarly priced flagships.

However, viewing angles are poor, and the set is still prone to blooming, despite its excellent dimming performance. However, such flaws are common among TVs in this price range, and the image quality is excellent for the money.

The U8G is a terrific pick if you’re searching for a cheap flagship 65-inch 4K TV with fantastic home theater performance, high brightness for daytime viewing, and reliable streaming.